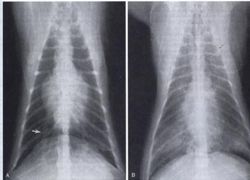 Infection is a relatively rare disease of cats (rates of infection at 5-20 of that of dogs[3]), but is increasingly diagnosed parasite in feline practise due to heightened awareness of the disease and improved diagnostic methods. Many cats are subclinically infected and infection tends to be self-limiting.

Clinically affected cats may present at veterinary clinics with a wide range of clinical signs, such as chronic coughing, laboured breathing and vomiting, however, many infected cats die suddenly without any premonitory signs. Feline heartworm disease is clinically challenging on a number of different levels. Diagnostic confirmation usually requires a combination of tests and treatment is most often limited to symptomatic therapy as curative medical and surgical treatments place the feline patient at significant risk. Safe and effective prophylactic drugs which kill a number of life-cycle stages are readily available.

Feline infection can occur at any age and immunosuppression is not a prerequisite for infection. Indoor and outdoor cats are equally represented. Male cats were thought to have a higher prevalence of infection than female cats but a relatively large retrospective study disputes the point. Acute lung injury is a major contributing factor to the initiation of clinical signs. It is hypothesised that the arrival of fifth-stage larvae in the lungs and the death of the adult are the most likely stages of the life-cycle to be associated with clinical signs. After an initial host response, the signs may abate and become subclinical. In chronic cases, perivascular reaction and evidence of thrombus formation with recanalisation are noted.

D. immitis has evolved an array of specific molecular strategies to evade host immune attack. Marked difference in the surface properties of the third and fourth larval stages may delay potentially destructive immune responses to these stages in the host. Clinical and laboratory investigations have suggested that the acellular nature of the D. immitis cuticle and its thrombo-resistant surface properties allow the parasite to circumvent the host’s immune response and improve long-term survival. Another part of D. immitis capacity to evade host immune responses is due in part to the presence of Wolbachia spp, a bacteria that lives symbiotically within the reproductive tract of adult D. immitis heartworms. This bacteria co-evolved with most filariids including those which infect humans, such as Wuchereria bancrofti and Brugia malayi (Elephantiasis), and Onchocerca volvulus (River blindness). Elimination of the bacteria Wolbachia from filarial nematodes generally results in either death or sterility of the heartworm adults. Consequently, current strategies for control of filarial nematode diseases include elimination of Wolbachia via the simple doxycycline antibiotic rather than far more toxic anti-nematode medications.

There is evidence that Wolbachia, an endosymbiontic bacterium present in D. immitis, may play a role in immunopathogenesis of heartworm disease. Heartworm-infected cats can be exposed to Wolbachia when larvae, or adult worms, are killed; when Wolbachia are released with microfilariae from the uterus of females; and possibly through the excretory system of both male and female worms. One recent study demonstrated a strong IgG response against the surface protein of Wolbachia in heartworm-infected cats, leading to the suggestion that bacteria could play an important role also in the inflammatory reaction which is characterises the heartworm infection in cats.

Clinical presentations of feline heartworm disease vary widely in severity and include acute death, chronic coughing or intermittent dyspnoea, and asymptomatic infections. In one stody of 50 cases, asymptomatic infections were diagnosed incidentally in 28% of cats. Cats infected with immature worms, or as few as one adult worm may show clinical signs. At presentation, clinical signs are most commonly related to respiratory tract, with dyspnoea and coughing most often observed. Vomiting is a relatively common finding, reported in about one third of cases. Neurological signs, including syncope, collapse, blindness and vestibular signs, may also occur, probably in association with aberrant larval migration through the brain. The initial host response of diffuse pulmonary infiltrate and resultant clinical signs occurs most frequently about 4-7 months after infection and is usually followed by a subclinical stage. However, the subsequent death of adult heartworms may cause additional severe signs, such as acute collapse and death. [[Congestive heart failure is a rare clinical signs. Acute death syndrome due to D. immitis is commonly reported.

A thorough diagnostic approach using a combination of tests is necessary in the diagnosis of feline heartworm disease because of the low worm burdens and light antigen load. Serology available for the diagnosis of feline heartworm disease includes serum antigen and serum antibody tests. In the serum antigen test, an enzyme-linked immunosorbent assay (ELISA) detects a protein found primarily in the reproductive tract of the female worm. This test may lack sensitivity due to low worm numbers and the possibility of infection solely with male worms and so it is not recommended as a screening test for feline heartworm infections[4]. However, the rate of false-positive results with antigen serology is low, so that a positive result generally indicates a current infection. ELISA antibody tests are available commercially as screening tests for cats when there is an index of suspicion for heartworm infection. The specificity of antibody tests may be compromised because they detect exposure to migrating heartworm larvae and will also be positive in cats with previous heartworm infections. False-negative antibody test results were previously considered rare, but in two independently conducted studies, 14% of infected cats have negative antibody test results. Another more recent study reported that more than 20% of antigen-positive heartworm-infected cats were antibody negative. Combining the results of serum antigen and antibody tests achieces higher sensitivity and specificity than by using either test alone. Sensitivities of up to 100% and specificities of up to 99.4% were reported in one study, when antigen and antibody tests were used in combination[5].

Echocardiography is a useful adjunctive test in cats in which there is a suspicion of heartworm disease, but antigen test results are negative. One retrospective study of heartworm-infected cats reported that heartworm were detectable by the use of echocardiography in 17 of 43 cats, most often in the pulmonary arteries, but also in the right ventricle, right atrium and caudal vena cava. Heartworm infection was diagnosed exclusively by the use of echocardiography in five cats in which antigen test result was negative. The sensitivity of echocardiography for the detection of heartworm infections in cats is highly operator-dependent and some experienced investigators have reported up to 100% sensitivity. It is possible to obtain false-positive results when assessing cats at risk for heartworm using echocardiography, due to occasional presence of linear densities that mimic filariae. These densities are found when the main pulmonary artery branches and their cause is unknown, but they are presumed to be sonic reflections from the pulmonary artery wall.

Necropsy confirmation of heartworm infection has been used as the standard for determining heartworm status in dogs, but routine necropsies may miss ectopic infections, which are more common in cats. Precardiac infections may also cause clinical signs in cats, but are difficult to confirm on necropsy. However, necropsy is still the method against which the performance of other tests is judged.

Surgical removal of heartworm is feasible and effective in symptomatic cats with echocardiographically visible filariae in the right heart and main pulmonary arteries. Transjugular catheterisation and removal of heartworm using rigid or flexible alligator forceps, horsehair brushes, endoscopy grasping forceps or basket-type retrieval catheters have been well described in the literature. Other more invasive techniques including right auricular entry into the heart and main pulmonary arteriotomy have also been developed. Heartworm extraction often results in rapid and dramatic clinical improvement. However, accidental damage to the heartworm during extraction procedure can result in shock-like signs and death.

Most pathological findings in heartworm-infected cats involve the lungs. Affected cats develop villous endarteritis and muscular hypertrophy of the pulmonary arteries and arterioles. There may be formation of elevated ridges projecting above the surface of arteries/arterioles. Lobar and medium-sized pulmonary arteries are similarly affected, with villus-like structures that protrude into the lumen and partially obliterate affected vessels. Multiple areas of infiltration of eosinophils, lymphocytes, macrophages and plasma cells are observed in the intima and mild multifocal accumulation of macrophages are present in the alveoli of most cats. Cats infected with Toxocara cati and Aelurostrongylus abstrusus may develop similar pulmonary arterial pathology.

In one study, pulmonary arterial hypertrophy were demonstrated for 2 years after infection with A. abstrusus and it was suggested that these changes may persist for the entire life of the cat. Confusingly, pulmonary artery medial hypertrophy and hyperplasia have also been reported in specific pathogen free cats, with one study reporting the same frequency in both specific pathogen-free and conventional cats, indicating that pulmonary parasitic infection is not a prerequisite for the condition. Increased muscular thickness of the medial layer of the pulmonary arteries must also be differentiated from vasoconstriction, as both can appear similar microscopically. This is achieved by calculating the area of the median on cross-section in a number of large and small arteries in a section of lung. The resultant figures are compared with reference ranges for normotensive pulmonary arteries and those with moderate and severe pulmonary hypertension[8].

There are currently four macrolytic lactone drugs registered for feline heartworm prophylaxis – moxidectin, ivermectin, milbemycin oxide and selamectin. These products are a safe and convenient option for cats living in areas where canine heartworm disease is endemic and exposure to infective mosquitoes is possible. Additionally, depending on the active ingredient, these products protect cats from a variety of common endo-and ecto-parasites. Indoor-only housing status is not a reliable method of prevention of infection, as the home environment may not provide an effective barrier to the entry of mosquitoes. One retrospective study reported that 27% of infected cats were kept exclusively indoors.

Prolonged administration of macrolytic lactones has a ‘reachback effect’, i.e. they can kill young larvae, older larvae, immature or young adults, and/or older adult filariae. This is advantageous in cases of owner compliance failure, or when heartworm infection status is unknown at the time that prophylactic treatment is commenced. Efficacy of 95% or more requires dosing for 9-30 months, and older worms are difficult to kill. Of the various macrocytic lactone, ivermectin has the most potent combination of clinical prophylaxis, reachback activity and adulticidal activity; milbemycin oxime has the least; and selamectin and moxidectin injectable lie somewhere in between. The unique effects of ivermectin are related to the age of the heartworms at the initiation of treatment. The earlier treatment is started, the more stunted and smaller the worms and the shorter their survival time.