Maine coon are the largest breed of domesticated cats.

The Maine Coon is very well known for its intelligence and beautiful physical appearance. The Maine Coon cat is also known as the gentle giant due to its distinctive physical characteristics and playfulness. 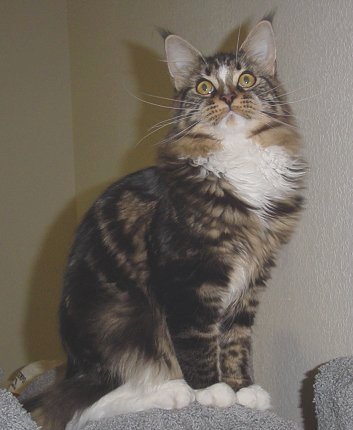 Maine Coon cat is one of the oldest breeds and is believed to be originated from England. It is believed by most breeders that Maine Coon cat was originated in matings between pre existing short haired cats in England and overseas long-hairs resulting in this beautiful breed of cats known as The Maine Coon Cat.

The Maine Coon cats are often distinguished by their intelligence and playfulness. One of their best quality is their tendency to use their paws extensively and for that reason a Maine Coon cat will very easily learn how to open doors or pick up small objects or play with small toys some even use their paws while eating. For that reason Maine Coon is favored over other breeds as a domestic pet cat since it is easy to train and due to their above average intelligence.