Ernest Hemingway made polydactylism of cats famous when he adopted a colony of about 50 cats, half of which were polydactyl[1]. Polydactylism is relatively common in cats, and mostly non-pathogenic, but a correlation exists between extra digits and other genetic abnormalities such as radial agenesis, bilateral radial hypoplasia (hemimelia) and generalised cardiomegaly[2][3][4][5]. 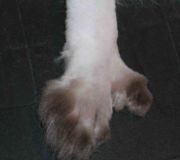 Polydactyly in ‘Poly’, a 12 week Ragdoll male kitten with no litter-mates affected. Limb shaved prior to amputation of supernumerary digit. © Dr Jim Euclid

There are two forms of polydactyly:

Polydactyly is caused by an autosomal single dominant gene Pd, which, when expressed, causes changes in the pre-axial (i.e. medial) part of the limb, resulting in an excess of growth in that area[7]. Polydactyly can occur by itself, or more commonly, as one feature of a syndrome of congenital anomalies. When it occurs by itself, it is associated with autosomal dominant mutations in single genes, i.e. it is not a multifactorial trait[8].

Polydactyly is an example of a novel class of genetic mutations caused by ectopic expression of a signalling molecule in the developing limb bud. Mutations in the long-distant, limb-specific cis-regulator for the signalling molecule are responsible for the ectopic expression which underlies the abnormality. Polydactylous cats are an example of single nucleotide substitutions. These single nucleotide substitutions operate as gain-of-function mutations that activate signalling molecules at ectopic embryonic sites and that the sequence context of the mutation is responsible for a variable regulatory output. The plasticity of the regulatory response correlates with both the phenotypic variability and with species differences[9].

There are two particular breeds that can claim historical reference to polydactylism; the Pixie bob, which was founded on a polydactyl cat and the Maine coon. There have been reports that this trait once accounted for 40% of the Maine coon breed, but there is no specific data to substantiate these figures. Accounts of polydactyly in the Maine coon cat are documented as far back as 1876, when an MCBFA member discovered a painting depicting the trait[10]. In recent years there appears to be a rise in the number of breeders working with the polydactyl trait and MCPI, an International organisation has been formed to promote and protect the trait in the Maine Coon.[11].

An association has also been reported between dominant white colour in cats and polydactyly[12].

Clinical signs can vary from clinical normality to lameness in the affected limb. In more severe cases, where polydactyly is associated with hemimelia and cardiomegaly, euthanasia is often inevitable[13].

In minor cases, no specific treatment is required, although cosmetic removal of the digit is usually performed. If clinical signs warrant surgical correction, amputation of supernumerary digit(s) is indicated. Surgery is a relatively minor procedure in most cases.

Breeding from polydactyl cats is strongly discourage due to the heritable nature of this condition. Queens and Toms which carry the genetic predisposition should be sterilised.