Cytauxzoonosis is a serious, often fatal, tick-borne disease caused by the apicomplexan protozoal parasite Cytauxzoon felis. This disease affects domestic cats in the south central and south-eastern portions of the United States[1]. It is a genus of protozoa closely related to Theileria spp.

The causative organism, Cytauxzoon felis, is classified in the Order Piroplasmida, Family Theileridae. Because of the rapid onset of severe clinical illness and high mortality (historically greater than 95%) associated with this disease in domestic cats, they likely serve as accidental dead-end hosts. The natural reservoir host of C. felis is the North American bobcat (Lynx rufus). In most instances, bobcats remain asymptomatic when infected by C. felis; however, fatal infection also has been observed in this species. Ticks are believed to be the natural vector for this organism. Experimentally, an Ixodid tick (Dermatocentor variablis) has been shown to transmit C. felis from bobcats to domestic cats, causing the clinical signs associated with cytauxzoonosis. As expected, Cytauxzoonosis is seen more often during the summer months in the United States (May through September) when ticks are more likely to be found. Cats with access to the outdoors (especially wooded areas) are at higher risk of coming into contact with infected ticks and acquiring this disease[2].

Organisms in the genus Cytauxzoon have two stages in their life cycles: an erythrocytic piroplasm and a leukocytic or tissue phase. The leukocytic phase begins when C.felis organisms infect mononuclear phagocytes. The organisms infecting these cells undergo asexual reproduction forming schizonts. As these leukocytes become engorged with schizonts, they line the lumens of veins in many of the organs of the body, causing obstruction of blood flow. Obstruction of blood flow and ischemia are responsible for many of the clinical signs associated with this disease[3]. Subsequently, the schizonts develop into merozoites which eventually cause host cell rupture and enter the blood. These intravascular merozoites infect variable numbers of erythrocytes. The parasitemia seen on the stained blood smear often represents a late stage of disease. Infected cats typically die within a few days after the onset of parasitemia[4]. 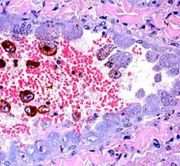 Less frequently, renomegaly, splenomegaly, and hepatomegaly have been identified on physical examination. A fever may be present that ranges in severity from 103-107ºF. Febrile episodes usually coincide with the onset of parasitemia as observed on stained blood smears. Hypothermia, recumbency, and coma generally are signs of terminal disease[5].

Respiratory distress in common in affected cats. It seems likely that macrophage activation and inflammatory mediators lead to an interstitial pneumonic process characterized by neutrophilic infiltrates and pulmonary edema[6].

A leukopenia with a left shift and toxic changes of neutrophils, thrombocytopenia, and a normocytic, normochromic, non-regenerative anaemia may be seen. Abnormal hemostasis may be present from disseminated intravascular coagulation. Common abnormalities in the biochemical profile may include hyperbilirubinemia, hyperglycemia, hypoalbuminemia, hypokalemia, and increased activity of alanine aminotransferase. In many cases, marked bilirubinuria is observed[7].

Diagnosis of Cytauxzoonosis is made by identifying piroplasms within erythrocytes in the stained blood smear. These erythroparasites may appear as round to oval “signet rings” (1-1.5 µm in diameter); bipolar, oval, “safety pin” forms (1-2 µm in diameter); tetrad forms; or anaplasmoid round “dots” (less than 0.5 µm in diameter). The anaplasmoid form may appear as single organisms or as multiple organisms resembling chains. Microscopically, the piroplasms have a small, peripherally-located nucleus that stains dark red to purple with a off white to light blue cytoplasm when using Giemsa stain. The number of erythrocytes parasitized with C. felis varies among cats and with the stage of disease. However, the percentage of affected erythrocytes usually is low. Infrequently, large mononuclear phagocytes containing developing merozoites can be seen at the feathered edge of peripheral smears. These parasite-laden macrophages may measure 75 µm in diameter[8].

When detection of parasitized erythrocytes is difficult in the stained blood smear, fine-needle aspirates of the spleen, lymph nodes, or bone marrow may provide a diagnosis. In these cases, the large, merozoite-laden macrophages may be readily observed. Other methods used to diagnose cytauxzoonosis in cats include a direct fluorescent antibody test for detection of the tissue phase of the parasite and a microfluorometric immunoassay system to detect serum antibody to the organism. However, these tests are largely experimental and generally are not available commercially.

Because of the extremely rapid course of illness associated with cytauxzoonosis, a diagnosis is often made by post-mortem examination. Grossly, dehydration, generalized pallor, and/or icterus may be observed. Other common findings at necropsy include enlarged, oedematous, and reddened lymph nodes; distended abdominal veins (especially splenic, mesenteric, and renal veins); petechial and ecchymotic haemorrhages of abdominal organs, heart, and lungs; large dark spleen; and congested, oedematous lungs.

Impression smears of affected tissues are usually diagnostic. Large mononuclear phagocytes (engorged with schizonts and developing merozoites) are readily identified within tissue imprints. On histopathology, schizont-containing macrophages are prominent within the lumens of larger blood vessels, especially in tissue sections of lung, spleen, and liver (Fig 5). These parasite-laden macrophages may be identified free within the lumen or attached to wall of the vessel, often appearing to occlude the vessel. Despite the severity of infection, very few signs of inflammation are evident histologically.

Although the prognosis is poor, some cats respond to treatment with diminazene aceturate or imidocarb dipropionate (along with aggressive supportive care).

Some cases may recover without antiprotozoal therapy (although some cats remained parasitemic and could be a potential source of infection for naive cats)[9].

No vaccine is currently available as a preventative measure in cats.